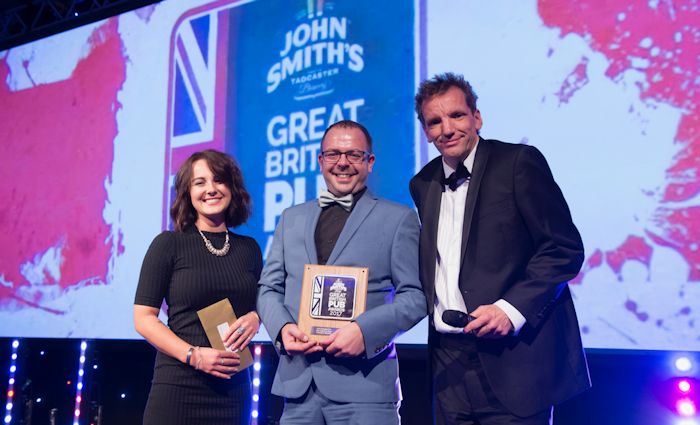 Posted at 17:46h in Awards, News by controller

The Coach and Four was celebrating after being named the Best Managed Pub in the country in the John Smith’s Great British Pub Awards.

The awards, which celebrate the best pubs throughout the UK, took place at the Park Lane Hilton, London, on 7 September and saw the Coach and Four beat off strong competition from rival operators.

Described as the jewel in the crown for family brewers Hydes, this Wilmslow-based operation is a powerhouse of a business, and wowed judges throughout the competition.

Ed Bedington, editor of pub trade magazine The Morning Advertiser, said: “These awards celebrate everything that is so great about the Great British Pub, which is an institution the entire country should be proud of.

“I’m delighted to be able to announce that The Coach and Four has won the title of Managed Pub of the Year. This is a pub that clearly stood out against a very competitive field and its recognition is much deserved.”

Ifeoma Dozie, brand director for John Smith’s says: “Huge congratulations to The Coach and Four for winning the Managed Pub of the Year!  We are so lucky in this country to have an abundance of pubs – nowhere else in the world has pubs like us Brits.

“Pubs are central to all our lives – they’re the place where memories are made, from first dates, to birthday nights out, to great evenings with mates. They are so central to every village, town and city in the UK and the people that run them are pillars of their communities.  Pubs are the places where people come together whether it’s for a pub quiz, weekly karaoke, live local bands, stand-up comedy, or just to simply enjoy a refreshing pint.

The Great British Pub Awards have been running for 17 years and saw more than 1,000 pubs in the running for titles across 17 different categories, ranging from Best Food Pub to Best Freehouse.

For more information on the Coach & Four please visit their website www.thecoachandfour.co.uk